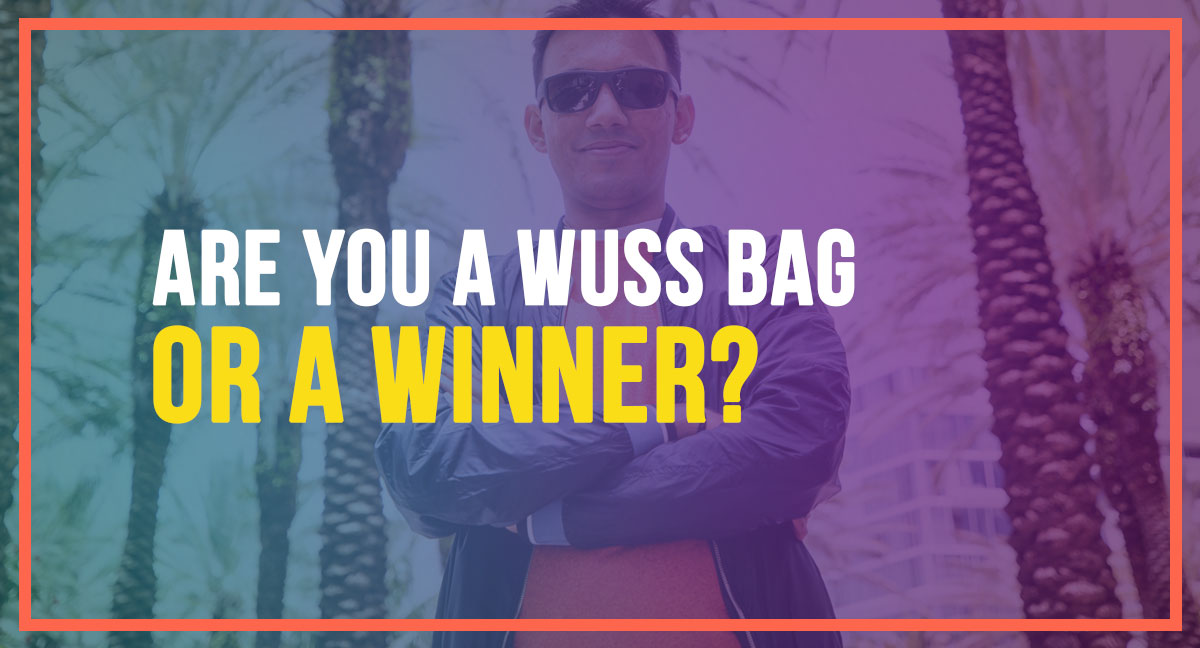 Hi.. Today.. Im in this weird kind of mood! Just feel like being on the face and wanna pour my heart out on a few things which I don’t normally express openly..

I believe that there are only two types of people in this world today..

You’ve got the WUSS BAGS.. who love giving excuses and get some immense pleasure complaining about what they lack in life…

And then you’ve got the WINNERS.. Who no matter what.. chase after their dreams and achieve them.. who are grateful for everything in life in spite of things not going their way.

Every SINGLE person in this world has gone through the WUSS BAG syndrome at some point of time in their life.. And usually it’s one powerful situation in their life which transforms them into becoming a WINNER.

Winners Who Used to be Wuss Bags

– Steve Jobs used to be a WUSS BAG, when he was kicked out of his own company.. What a shame!

– Michael Jordan used to be a WUSS BAG, when his school team basketball coach said that he was no use to the team.

– Sachin Tendulkar used to be a WUSS BAG, when he failed his tenth standard syllabus.

– Thomas Edison was a WUSS BAG, when he failed over 4000 times in trying to invent the bulb.

– Mark Zukerberg was a WUSS BAG in front of his girlfriend in college who openly ditched him.

– Nelson Mandela used to be a WUSS BAG when he was in prison for so many years at a stretch.

– Bill Gates used to be a WUSS BAG when he dropped out of college.

– Abraham Lincoln used to be a WUSS BAG when he went through his 12 major failures in his political life.

– Isaac Newton used to be a WUSS BAG when he did so poorly in grade school, that his teachers said that he was a ‘good-for-nothing’.

– Ludwig Van Beethoven was considered a WUSS BAG by his music teacher who said that he had absolutely no creativity whatsoever in music and composition.

– Walt Disney was a WUSS BAG when his first ever cartoon movie production took him straight into bankruptcy.

– Winston Churchill failed his 6th grade and was considered a WUSS BAG by everybody that he knew.

– Steven Spielberg was a WUSS BAG when he did not complete his junior school education.

– Albert Einstein was considered retarded from his childhood and people though he was a crazy little WUSS BAG.

– Henry Ford was called a super WUSS BAG for failing in two automobile companies which he has started earlier to the Ford Motor Company.

So.. All WINNERS had a WUSS BAG within..

What Caused The Change?

If you think about all the examples given above, all of them aren’t supposed to be successful in life..

But what caused them to break beyond boundaries in their respective fields of expertise..??

I believe that most successful people on earth are ones who’ve hit such a hard rock bottom in their lives, that the pain that they’ve experienced will be the key motivating factor, that they will NOT settle for anything lesser in life, until they reach the peak..

THE PAIN (There’s no place lower to go)
THE BURNING DESIRE (to prove a point to the world)
THE PASSION (realising their dharma, what they we’re born to do)

If you’ve NOT FAILED.. Then there is no chance for you to reach the peaks.

How Does This Transformation Take Place?

When I was contemplating on this point.. I realised that all successful people would have gone through some turning point in their lives.. In some very crucial moment of decision.

This transformation actually takes place in a split second.
It is ‘that moment’ when you decide that..
– ‘Enough is enough’..
– ‘Enough of all this bullshit crap’..
– ‘I don’t care what the world thinks about me.. I’m just going to do it’
– ‘I will not tae charge of my own destiny’

I’ve been through loads of success programs in the last few years.. And personally.. I feel that NOT ALL of them work.

This comes to the point of Internal Vs External Motivation.

Most of these personal development programs and courses are external motivation based programs.. designed to give you a temporary boost to your already pathetic situation in life..

Usually you need to keep going through these programs AGAIN & AGAIN.. Like bathing everyday to keep yourself motivated.

With internal motivation, the story is a bit different. It will happen in your life ONLY ONCE. And then this happens.. you’re will never be the same again..

The internal drive is so strong.. That nothing in the world will be able to shake you… until you have reached your GOAL!

This is what the Empower Network did to me..

All these years, we’ve have been listening seminar after seminar.. course after course.. guru after guru… info-product after info-product…

What the Empower Network Inner Circle did to us was that it caused a huge nuclear explosion (shift) within.. Which made us realise how exactly we can start living the lifestyle that we really want..

“They teach us how to live a lifestyle of abundance, purpose and vision to help people!”

David Wood and David Sharpe were WUSS BAGS too (here’s their personal story), but today they’ve caused a world revolution by starting of the Empower Network system.

To delete the WUSS BAG inside.. you first have to realise who you are as a person..

You need to think about what you want to accomplish in this lifetime… after all we all only have a limited time on this planet.

Once you realise your life purpose.. and once you start moving towards fulfilling that purpose, then you’re actually beginning to live a fulfilled life..

You need to turn into a WUSS WINNER! Don’t remain a WUSS BAG.. Please!

ARE YOU A WUSS BAG or a WINNER?