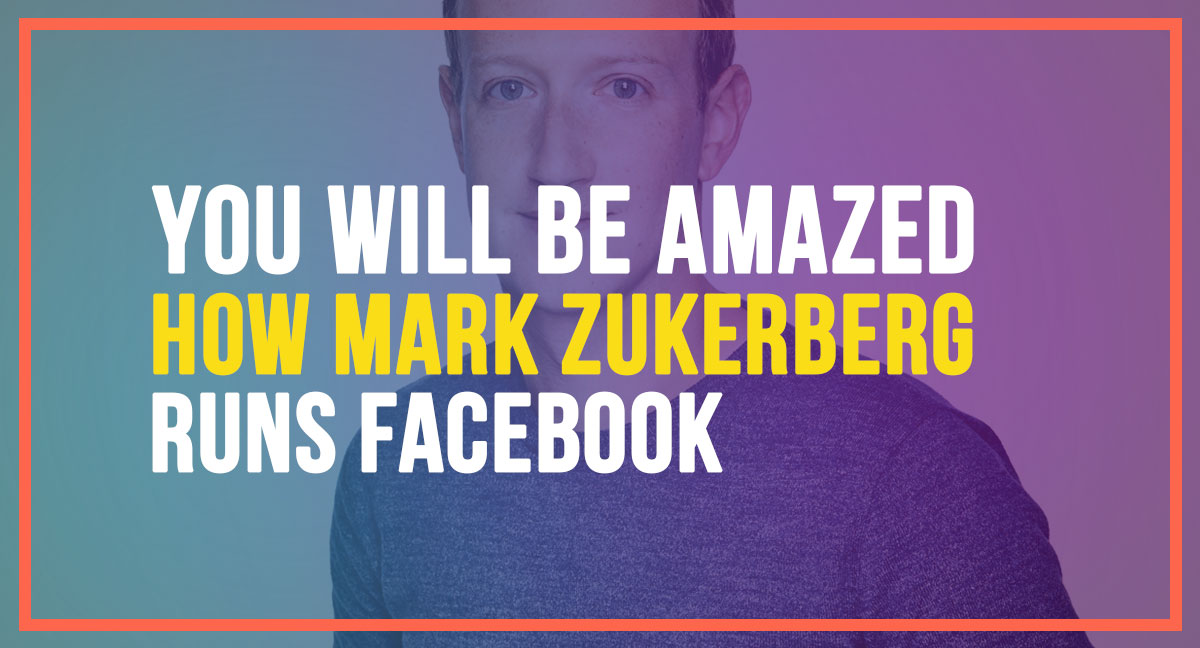 Zuckerberg recently posted the first ever live video straight from the FB headquarters.

While he talks about the work culture at FB he casually introduces us to his desk. Yes, his desk.

Not a huge cabin decked with the latest gadgets that you would expect from the CEO of one of the most futuristic companies on the planet. He sits with his employees, like his employees.

There’s no cabin culture at facebook since they want to promote free trade of speech and ideas. And Zuckerberg doesn’t actually take the thing about being the boss that seriously. Indian CEOs should definitely learn a thing or two from Zuckerberg and come out the confines of their dandy cabins. Check out the video below

5 Leadership Lessons We Can Learn From Mark Zukerberg

I got these from Inc.com. Pretty awesome points about how Mark Zukerberg runs a company.

The most successful entrepreneurs share the same trait: They are passionate about what they do. Zuckerberg has always been fascinated by building systems that connect people. His passion was always to make the world more open, sometimes radically so.

Passion is what turns an entrepreneur into a successful business leader: If you are driven by passion you won’t give up, no matter how long the journey, and you keep learning constantly. ”

Find that thing you are super passionate about. A lot of the founding principles of Facebook are that if people have access to more information and are more connected, it will make the world better; people will have more understanding, more empathy. That’s the guiding principle for me. On hard days, I really just step back, and that’s the thing that keeps me going.” –Mark Zuckerberg

Lesson: Passion fuels perseverance, one of the key ingredients of success.

Great leaders (and great companies) create movements, not just products. Facebook isn’t just a social networking site, it is a way of staying on touch with people around the world, a place to bring people together and build communities, and a tool for sharing information.

By always keeping his purpose in mind, Zuckerberg has been able to focus on creating the best product for achieving this.

“At Facebook, we’re inspired by technologies that have revolutionized how people spread and consume information. We often talk about inventions like the printing press and the television-;by simply making communication more efficient, they led to a complete transformation of many important parts of society. They gave more people a voice. They encouraged progress. They changed the way society was organized. They brought us closer together.” –Mark Zuckerberg

The most innovative companies allow their employees the freedom to develop their interests and to take risks. Facebook has an interview process that only selects employees who are the right fit for the company’s culture. Once they are in, they take part in intensive training that teaches them the “hacker way” of fast, creative coding that Zuckerberg prizes.

They are also allowed to work on the projects that they are most interested in vs. those that are assigned to them. Companies like Facebook, Apple and Zappos have created a culture that empowers courage of conviction, freedom of speech, and action. This comes from strong leadership that leads by example.

“I think as a company, if you can get those two things right–having a clear direction on what you are trying to do and bringing in great people who can execute on the stuff–then you can do pretty well.” –Mark Zuckerberg

Lesson: Get the right people on board and wrong people off the bus. And where possible hire for attitude, not skills. Skills can be taught, passion can’t.

Facebook is utterly committed to its product. Every innovation is to further its goal of connecting people in the simplest way possible. Facebook’s philosophy is to “move fast and break things” and this has ensured the rapid growth that has allowed the company to lead. Zuckerberg’s complete belief in his product has also given him the strength to persevere with some of the most unpopular changes in the face of huge opposition, even within his own company.

When Zuckerberg announced Facebook as a platform, people thought he was crazy. But expansion into a platform has thrust the company into the next stage of successful growth.

“The Hacker Way is an approach to building that involves continuous improvement and iteration. Hackers believe that something can always be better, and that nothing is ever complete. . . There’s a hacker mantra that you’ll hear a lot around Facebook offices: ‘Code wins arguments.’ ” –Mark Zuckerberg

Lesson: Establish a culture that welcomes innovation. And have courage to stick to your vision and be dedicated to proliferating the culture that helps execute on that vision in the most effective way.

No business leader can run a company all by themselves. Success is a team sport. Great leaders recognize their own weaknesses as much as their strengths and bring in the right people in to form partnerships that drive success. Whether it is investors, a management team, suppliers, distributors or retail partnerships, partnering with the right people is vital.

At Facebook, Zuckerberg provides the imagination, while Sheryl Sandberg, Facebook’s chief operating officer, provides the execution around his vision. Like Warner Bros., Steve Jobs and Steve Wozniak, Ben Cohen and Jerry Greenfield, or any other successful business partnerships, Zuckerberg and Sandberg share the same values, complementary strengths, commitment, mutual trust and the mutual respect needed to continue to drive the company forwards.

“Sheryl has been my partner in running Facebook and has been central to our growth and success over the years.” –Mark Zuckerberg

Lesson: The right partnership of imagination and execution is at the heart of a successful company.