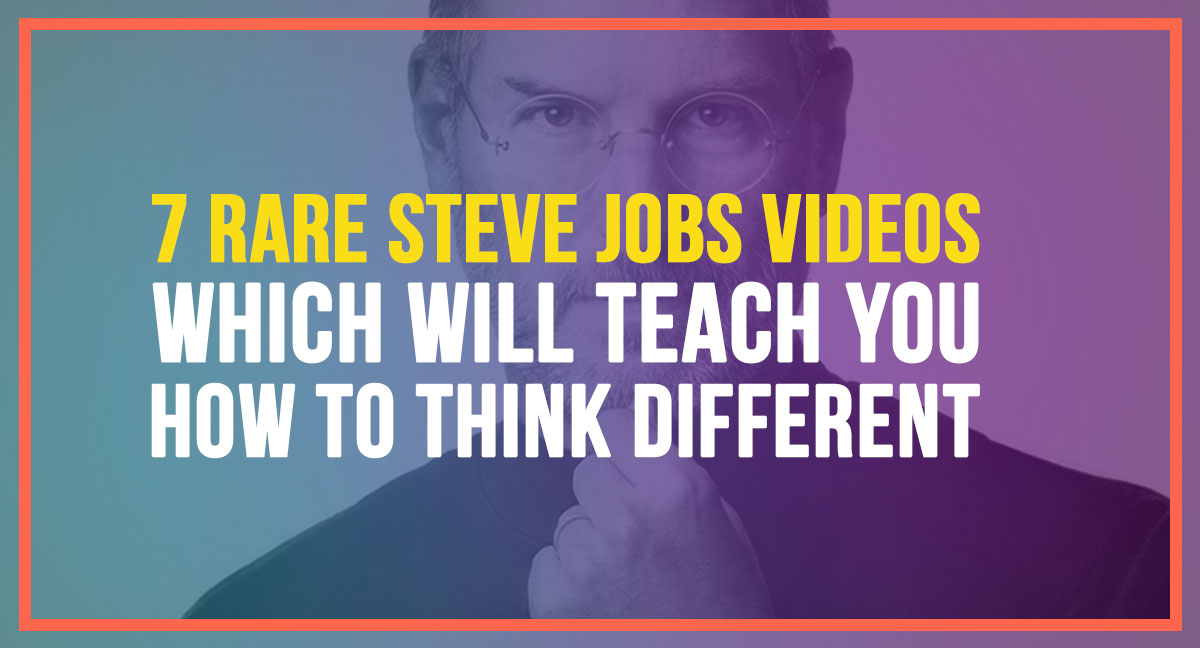 One of my biggest inspirations of all time is Steve Jobs. The whole reason why I started blogging and got into internet marketing is after watching one of his videos where he talks about how he wanted to create a dent in the universe.

Here are some of his rare videos on his thoughts about life and business.

This video shows rare footage of Steve Jobs from 1980 giving a talk about starting Apple. What’s particularly striking is Jobs’s explanation of man’s skill as a toolmaker to amplify his inherent ability, which he says is why Apple was formed: not as many other companies were–to create a product–but instead to create tools that enhance man’s innate talents.


In this video from 1982 (actually, an audio-recording-as-video) Steve Jobs talks to the Academy of Achievement about what makes a person intelligent. He contends that a lot of it has to do with memory and the ability to make connections. However, he says in order to make connections that are innovative, a person must not have the same experiences as everyone else or else everyone will just be making the same connections. The key, he says, is to get an many different and wide-ranging experiences as possible.


As an entrepreneur, I know the dread you feel why you are going over the numbers deciding if you have enough to start a company. Indeed, “What if I spend all this money and I end up with nothing?” is a common refrain I hear whenever I talk to others deciding to go all-in on an original idea that more often than not has an equal chance of failing or succeeding. In this video of a talk Steve Wozniak gave to the Colorado School of Mines in 1984, Wozniak reflects on how Jobs turned the table on his thinking when he expressed the same fears. “Yeah, we [might] lose all our money,” Jobs told Woz, “but at least we’ll have a company.”


This is a great video from 1985 that shows Steve Jobs talking to academics from Lunds University in Sweden and it should be required viewing for anyone who says, “Yeah, but Apple hasn’t innovated in years!” Here Jobs talks about how the mid-1980s were seeing a lack of major advancements in the computer industry. However, he was quick to point out that all industries go through slow periods, though even when they do there is momentum behind that that eventually leads to new spurts of innovation. Extra points to the video for shows Jobs arriving by helicopter.

How Steve Jobs Thinks Different About ASKING FOR HELP


This is perhaps my favorite Steve Jobs video. In it you see a bearded Jobs from 1994–one of the most powerful and creative people the technology industry has ever seen–speaking about not being afraid to ask for help. In Western society–especially in America–asking for help often has false connotations associated with it that you aren’t smart, clever, or rich enough to do it on your own. But Jobs knew there was no shame in asking for help and here explains that the ability to ask for help is often the difference between the people who accomplish something and the people who accomplish nothing.


This is a video of a keynote speech by Steve Jobs at Siggraph ’95. In it, Jobs talks about an upcoming movie his new company, Pixar, is making called Toy Story. The speech is rare in that it shows Jobs’s masterful understanding of industries other than technology. In this case, it’s the film industry. Here he opines that the future of films will increasingly rely on animation instead of its traditional role as just a tool for children’s films. This was a groundbreaking assertion in 1995, but today it seems obvious as virtually every film made today features some type of computer animation–with some relying completely on it.


In this amazing speech from 1997 in a Town Hall meeting room on the company’s Cupertino campus, Steve Jobs launches the most iconic marketing campaign in the company’s history: “Think Different.” Jobs reflects on the difference between using marketing to sell a commodity and using marketing to impart the ethos of a company to its users. You can see the correlation between the Think Different campaign and the speech Jobs gave 17 years earlier about man’s role as a toolmaker. This is the birth of Apple conveying its ethos that the company is a simple toolmaker for people with the passion and ability to change the world. (Extra points to Steve for the dig against the milk industry).